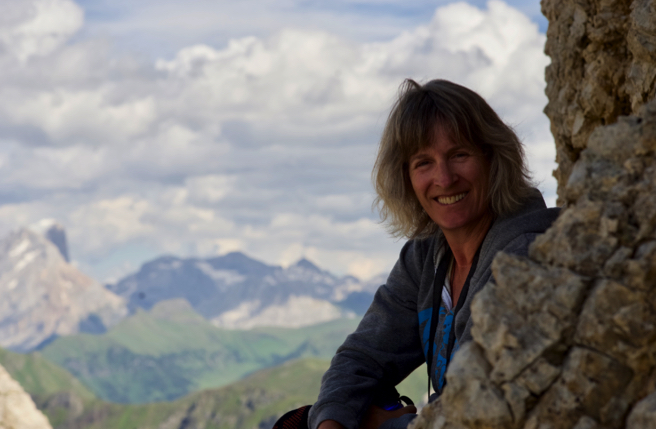 The Last Kiss is blasting on the radio. The sun is low. A Starbucks coffee mug is nestled into the car’s cup holder. “Charlie” sings softly, feeling sad as the words register. She sighs deeply and brakes for the stop sign. The car behind is not slowing. Everything in her world slows down. She brakes harder, willing the other driver to stop but watches as if from another place as the red Porsche crashes into the rear of her Honda and it accordions up to right behind her driver’s seat.

3 days later: The phone rings. “Can you help me? I was in a car accident. I wasn’t hurt but I can’t get back into my body. I go to work and talk with people but it as if I am not really there. I am driving a rental car but every time I brake I see the car behind crashing into me. I smell a cup of coffee and I freeze. I feel like I’m going crazy.” Gilly Thomas is a Certified Rubenfeld Synergist and works with people through a combination of a gentle touch and simple talk. This stimulation of both the right, sensory emotive side of the brain and the left, logical and verbal side is very effective at healing trauma.

In the past 15 years there has been a blossoming of new brain research which has resulted in a deeper understanding of the mechanics of the trauma response. Physical traumas, such as motor vehicle accidents or surgeries; or emotional such as sexual or emotional abuse or war veterans – all share a similar pattern.

Why? The human body and mind are complex and simple at the same time. When a person is threatened there is a specific sequence of events, now known as: “The Trauma Response”. The threat jumpstarts the body into a fight, flight or freeze response. The limbic (lower) brain is activated, hormones are released and the body is primed to defend itself from danger. Animals in the wild are apparently able to shake off the after-effects of such a response and continue on in their day as though nothing happened. Humans are different.

This highly adaptive response becomes problematic when perception is shaped by past experience – so: sadness, twilight hour, or rifts that are similar to those in The Last Kiss, the smell of coffee, sighing, and braking are some of the triggers that will send “Charlie” into a heightened state of alertness. A one-time trauma is easily remedied if caught in time. If not, it can develop in the same way as childhood abuse, neglect or repetitive trauma into a functional response pattern gone haywire. Over time, danger might be perceived everywhere.

People such as Charlie can find no more enjoyment in crying during a sad movie, drinking coffee, or even taking a deep breath. All can trigger the trauma response. Following are some of the identifiable symptoms centrally or peripherally associated with trauma responses:

The next time the young woman Charlie smells coffee her heart starts to race, her breathing becomes rapid and shallow and she spirals into a panic attack. She feels as though she is losing control and going crazy. In fact, her survival mechanism is functioning well. The part of her brain that responds to keep her alive, short circuits the logical rational neocortex that likes coffee (thinking part of the brain), and charges her body to respond to the danger again. This all occurs on a subconscious level. Not only does the coffee trigger her – (an external trigger) — there are internal triggers too, every time she applies the brake she feels anxious, and when the sun is setting she has a sense of unease. Even when she is sitting at her desk at work and her muscles return to the same sitting position as just prior to the accident, her body responds to the perceived danger.

This however is exhausting. The single event path into trauma becomes a neural superhighway as triggers send her again and again into the same response. Because much of the trauma experience is subconscious, and because the part of the brain that is involved in speech is bypassed in the trauma response, it is often impossible to put words to the trauma experience and ongoing manifestations. Months or years after the event, she feels tired; hypo alertness becomes routine and normal sensations numb. This can lead to the chronic symptoms of which there appears to be no solution because the traumatized person may experience the reality of the body rather than the mind.

Compassion and understanding of the trauma response helps. And there are avenues leading to change: psychosomatic therapies (like the Rubenfeld Synergy Method), EMDR, meditation, breathing, and visualization, all have an effect in decoupling the neural super-pathways formed by the trauma response and in re-invigorating the rational sensate existence. The Rubenfeld Synergy Method provides a very effective bridge to reconnect and integrate a person with themselves and their experience.

“Charlie” was able to reintegrate into her body. She was able to realize that the accident was in the past and that she was no longer in danger. She could relax and enjoy her life. The pieces of the puzzle that made no sense because she had not been able to put them together now formed a complete picture. She could safely feel sad, drink coffee, drive her car, sit at her desk and enjoy the sunset. The moments of freeze and dissociation were in her past, memorable but not governing her life.

Learn more at Working with Wellness.

Disclaimer: By reading this, you agree to all of the following: You understand this to be an expression of opinions and not professional advice.

Working With Wellness makes no guarantee or other promise as to any results that may be obtained from using the information provided. You are solely responsible for the use of any content and hold Working With Wellness and all members and affiliates harmless in any event or claim.

By Gilly Thomas | Working With Trauma

Are You Listening? The Body Tells the Truth
Trauma Response: When the Breath of Life becomes the Kiss of Death
How Can I Respond To Fear of an Impending Natural Disaster?